Currently I am in the middle of completing a short documentary on the above mentioned person. If you don't know him, it's okay. Not many knew of him unless they've read or bought his memoirs entitled MALAY NATIONALISM BEFORE UMNO. 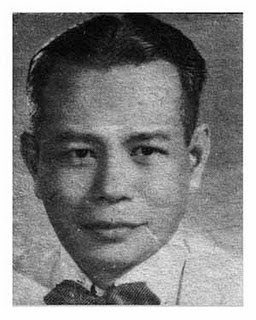 Even people in his own hometown of Matang where I went yesterday to interview his 80-plus year old brother Osman, no one knew who he was. Not even the staff of the Matang Museum where another national hero was once imprisoned, hanged and buried - Ngah Ibrahim. The museum is only 100 meters away from the house of Mustapha's birth and his old house.
Mustapha Hussain, who passed away in 1986, is one person who all Malaysians, especially the Malays, should know about. Who he was, and what he did in the struggle for our country's independance. Some say his leftist views was his bane but I disagree.
Ibrahim Yaakob, who I believe was a traitor to Malaya, is somehow more revered and given more space in our history books than Mustapha Hussain.
Ibrahim, for local history buffs, is one of the founder members of the first Malay 'political' group Kesatuan Melayu Muda (which was a front for the real meaning of the group - Kesatuan Malaya Merdeka). Mustapha was the vice-president.
Ibrahim was also the proponent of Indonesiaraya or Melayuraya - a country that was supposed to include Malaya, Indonesia, Brunei and Singapore.
He left Malaya after the war, became a banker and politician in Indonesia under the pseudonym Iskander Kamel and was given a hero's burial there.
Like Mustapha, who stayed on in Malaya, never agreed to many of Ibrahim's ideas. Mustapha is deemed a threat to security, imprisoned by the British after the war, barred from teaching and lived a simple life.
Unknown to many, he was actually an UMNO member during the early days of the party. When Onn Jaafar resigned as president, his friends invited Mustapha to compete for the post. Without money and influence, Mustapha knew it would be a tough battle. Surprisingly, he lost the election to Tunku Abdul Rahman by ONE vote.
To his dying day, according to his family, his love for the country and its peoples never abated. He cared more for the poor and the disadvantaged.
For all his efforts, he only received the AMP medal from the Perak Sultan in the 80s for his heroic role in saving the lives of 400 Malays from Changi prison at the beginning of the war.
After interviewing his family, especially his brother Osman in Matang, I wrote the following in his memory.

ODE TO A HERO

They were not Kings nor Princes

Nor were they Lords nor Masters,

They look up to the people seated up high,

Caste is caste, and caste is acceptable once.

Our land, our Tanah Melayu,

Rich in minerals and tin,

The new Masters brought in

and invited the others, at 40 sen a day,

To work, to toil and be exploited,

The teachers, the farmers, the mechanics, the labourers,

They just look on.

See their land as chess pieces,

Sacrificed to others for gold and opium

For cash and riches.

The "lazy Malays" kept on smiling,

with only rice on their plates

and some salt and some vegetables.

The rich play with the rich

And the whites play the rich

And the rich play out the people.

The rising sun threw the rays over the Tanah Melayu,

The Union Jack ran away

Tail between its legs.

The rising sun opened the eyes of some.

They now see the white invincibility a myth.

They realise that maybe,

The time has come

For them to rule the land of their forefathers.

The riches to returned to them.

The land theirs once again.

The land lost to others, may it be white, yellow, black or pink,

But the rising sun rose to soon,

And then began to set,

And with the setting sun,

With lead bullets and steel blades,

They rose to challenge the Union Jack.

It was a confusing time,

But for a few souls who wanted all these to end,

Who wanted Tanah Melayu to be what it should be,

Some resorted to the three stars,

Some resorted to take it to the people.

Some resorted to sleeping with the enemy.

The Kings and Princes kept quiet.

As long as their positions were respected,

As long as their dynasties were protected,

And the Union Jack kept them happy.

And they were pleased.

They also assume the masses respect them.

They know that there will be no Jebats amongst them.

Malays, who were once prevented from gaining knowledge,

Or even to receive full education began to read.

Tale of Two Cities, Three Musketeers and many others.

Some went left, others went right.

But the ideals are one.

And Mustapha was one of them.

A teacher. A simple man. A family man.

And a man with a plan.

He maybe left, but then again isn’t everyone’s heart is on the left?

Being anti British he was deemed a threat.

His friends were incarcerated. Somehow, he escaped.

It was then that the rising sun came.

He and friends were released.

The rising sun left, and they were incarcerated again.

This time he cannot escape.

Without a trial, he was thrown in prison in Batu Gajah.

When released, he was not allowed to teach,

He lost his job and struggled with his family.

His family that loved him

As a father, a husband and a true Malayan.

One wonders why we praise Tok Janggut, Mat Salleh,

Dato Sagor for being anti-British,

Those who took the same stance in the 40s and 50s

are considered enemies of Malaya.

Enemies of the state.

Enemies of the people.

Unless you sleep with the enemy, you are the enemy.

It really doesn’t matter that you and your friends were the first to rise,

and sowed the seeds of Merdeka.

It was you who had family members

die in the war fighting for freedom.

A brother who remained missing after the war.

Another slain by the three red stars.

No one sheds tears for them any more.

No one sheds tears for you.

To the victor, a new history.

Power and riches beyond imagination.

To the vanquished, a small plot of land

A cold slab. For the lucky few, a footnote.

But for those who know the truth,

We shed tears for your bravery,

We know our true heroes.

We know our fellow men.

there will always be another you.

We agree with those who knew you

And called you Bayu.

Today, from now on, I too call you Bayu.