Uncle Boonmee Who Can Recall His Past Lives, a surreal flick by Apitchatpong Weerasethakul, or Joe (his nickname amongst cineastes and friends) beat a host of big names to take home the coveted prize to Thailand.

The film depicts the story of a dying man who talks with the spirits of his late wife and his son.

How surreal is surreal? Well, in this movie, the son comes back as a talking monkey and another female character has an underwater copulation scene with a catfish.

The second place was awarded to Frenchman Xavier Beauvois's film Of Gods and Men, a drama about a group of monks from France facing terrorists in Northern Africa.

Uncle Boonmee is only the sixth Asian film to win the top prize at Cannes in seven decades of the festival, and the first for more than 10 years.

The Jury Prize went to Canadian Mahamat-Saleh Haroun’s film A Screaming Man, yet another portrait of a struggling father, this time in Chad, who puts his own welfare before that of his son as the country wrestles with civil war.

Mathieu Amalric, who directed and stars in Tournée (On Tour) as the manager of a burlesque dance troupe, took home the directing award.

What are interesting are the subject matters of the award winning movies. As you can gauge from short one liners of the movies that won awards, most were serious dramas covering the human spirit, will and triumphs.

Only one movie, Of Gods and Men, (though I haven’t seen it) sounds like a commercial venture – it’s about how a group of Catholic monks, in Algeria, fought Islamic terrorists and lost (according to the synopsis the monks were beheaded).

The others, especially Uncle Boonmee, were dramas whose directors have stamped their titles their own signature uniqueness and cinematic touch.

It took ten years for Joe to reach the pinnacle of cinema with this win. He previously tasted Cannes victory twice before with Blissfully Yours in 2004 (Jury Award) and with Tropical Malady that won him the Un Certain Regard honors in 2002.

With Malaysia’s current slate of mostly FINAS approved and backed titles and the eagerly awaited (NOT!!) Dua Alam movie financed by Dato Dr Rozaimie, when do you think we will grace the Cannes Film Festival? No, not win, just to be competing would be an achievement.

While we wait for Uwei’s magnum opus Hanyut to hit our screens in 2011/2012, we are left with a slate of comedy-monster-rempit movies to entertain outselves.

I truly don’t see much hope for Cannes success from Malay film directors to tell you the truth, but there is hope from the non-Malay filmmakers who have so far this year come out with movies like WooHoo, Ais Kacang Puppy Love and End of Daybreak (directed by a Malaysian).

I really don’t know what FINAS’s role is in promoting quality film that is good enough for Cannes success, but if the current titles are anything to judge by, they either have no role or are totally oblivious of what it takes to develop good cinema.

As time is slowly becoming a luxury, I went to Perak to check out some places that I have been to before some years back that I thought would be ideal for 1870.
Last Sunday, me and pal Ken, left KL and took the NKVE towards Gopeng and then head East towards Bandar Seri Iskandar.
I remembered that area has numerous disused tin mines, especially one that was turned into a water sports venue for the SUKMA held in Perak some years ago.
On the way to Seri Iskandar, Ken told me that he read something about a museum in Gopeng. As a fan of museums, we decided to check it out.
The museum is in the old part of Gopeng near the town square which was where the old town market was located. The museum, simply called Museum Gopeng, is 'created' by an NGO proud to archive and display the little town's proud history.
As you enter the small shoplot-turn-museum, you'd find a little counter in the center asking for donations. Entrance is, of course, free, but donations are more than welcomed.
On the left side of the entrance was some artifacts from the town's rich tin mine past. A signboard proudly states - No Tin No Gopeng. On the right, the town's rich rubber industry past with a sign that states - No Rubber No Jobs.
The museum is not as big nor as interesting as the private museum in Cameron Highlands, but it still is something the owners can be proud of. In the fifteen minutes that you stroll around in the building, you would get a glimpse of old Gopeng.
After that short stop, we immediately left for Seri Iskandar.
However, whilst passing Tronoh, we saw some sites that could be ideal for some scenes in 1870. We stopped to take some photos. 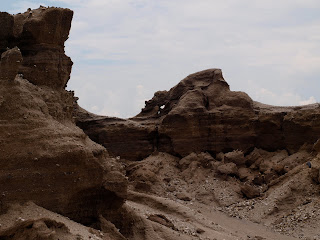 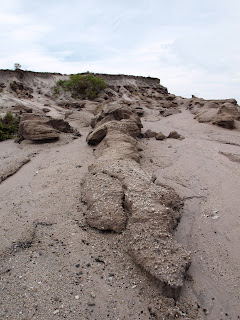 Strange formations on the disused tin mine site in Tronoh

This particular location really had some weird and arresting formations, as if you are on a strange planet.
In Seri Iskandar, the location I wanted to check out, is surprisingly now a privately owned site. It is situated right in front of the Petronas University.
There was no access road and the entrance is now guarded.
We went to see the guards and expressed our intentions to see the land for possible location shoot. Surprisingly, the guards are well mannered and even friendly. They allowed us in and in fact, one actually gave us a ride in his car as the location I described to them is deep inside.
The said site is really ideal for 1870 but I felt sad to see the buildings, built specifically for SUKMA, in total ruins. 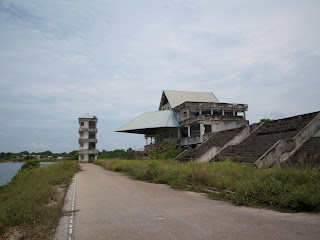 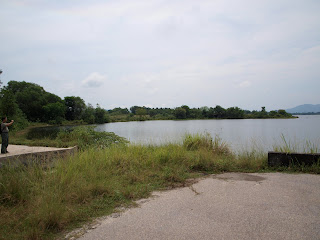 According to the guard, the place is now owned by Putrajaya Holdings, a company under the Petronas Group. He added that the company has plans to develop the site sometime soon.
Having taken photographs, I felt hopeful that Putrajaya Holdings would have no problem allowing me to construct my sets there for the TV series.
Ken and I then left the place feeling satisfied that the location really had potential.
Before returning back to KL, we decided to stop by Kuala Selangor and check out Bukit Malawati. 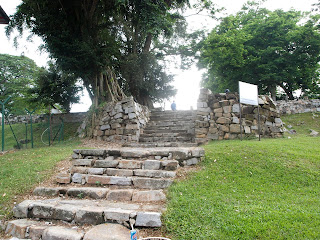 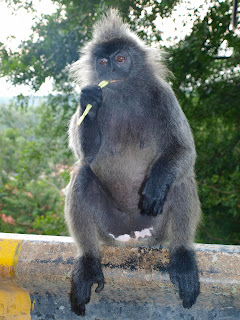 One of the silver haired denizens on Malawati Hill.

I have never been to the historical site, and visiting it gave me some sense of how much interesting history Selangor had and that most of us either don't know about, don't care or took for granted.
Posted by anwardi at 7:20 PM 1 comment:

VISITING JUGRA AND PAYING MY RESPECTS TO CHARACTERS IN 1870

I decided to go look for possible locations for my series 1870. So far, over the last months, I have been to Kuala Linggi whilst my PM went to Temerloh to scout for locations.

That particular day, I decided to go to Jugra, Kuala Langat, in Selangor.

I felt a little strange going there because Kuala Langat was amongst one of the many locations where the actual events of the Selangor Civil War took place. 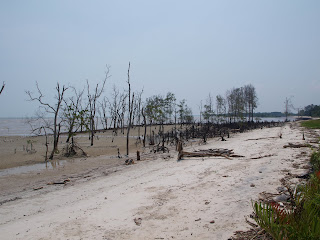 The trip took about 2 hours. A distance that is, in my books, quite far. Nevertheless, it was a pleasant trip.

Morib is an interesting little beach destination. Vastly different from Port Dickson. It even has a quaint golf course. However, there were not many areas conducive for my production needs. So I decided to check out other nearby areas, and fortunately for me, found one which was so secluded that I may consider it as a potential location. 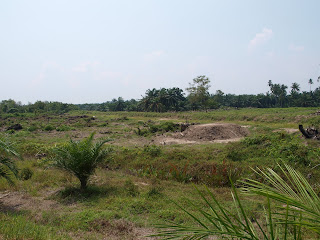 This beach, I think it's called Pantai Kelanang (please correct me if I’m wrong), it is quite deserted and nearby was a flat open land that I could envision building old Kuala Lumpur.

Where the beach is I could build the Klang Port and maybe Kota Mahadi.

Disadvantages? Electricity. We need at least two big generators to light up the area.

But as a location for 1870, it could be ideal. However, like I said a two-hour daily drive to Morib can be strenuous for the crew and cast.

After checking out the location, I dropped by Jugra’s historical area near Permatang Pasir. 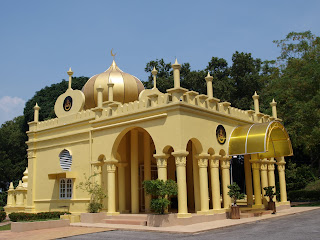 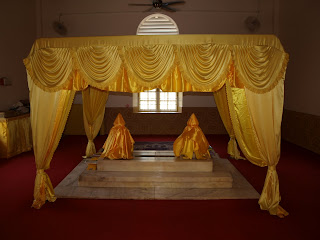 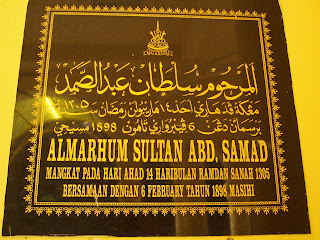 Around and encircling the perimeter of the Sultan’s grave, are the graves of members of his Royal household and I was surprised that many of the characters in my series 1870 were buried there including one major character – Tunku Alfah. The princess who was first engaged to Raja Mahadi and then forced to marry Tengku Kudin from Kedah at the beginning of the Civil War. 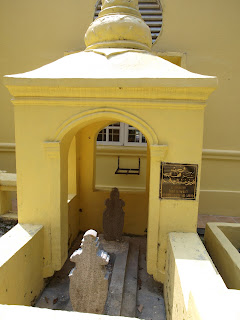 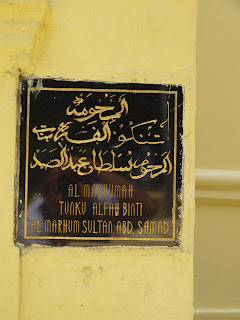 In my earlier research, her name has been spelled differently from Raja Arfah to Raja Atfah. However, having visited her grave in Jugra, and as written on her tombstone, I will henceforth call her Tunku Alfah.

Visiting the mausoleum gave me a strange feeling. It’s like visiting the grave of the late Sultan and paying him my respects as I am about to embark on making 1870 in which he is one of the central figures.