I might have mentioned about this in an early posting but I don't mind repeating it.I was recently in Singapore doing research for an upcoming documentary on pre-Merdeka Malay nationalists. My destination was the Singapore National Museum, always one of my favourite stops.My partner, Ken, followed and before we went to the Singapore History Gallery, I took Ken to some of the other Galleries since he has never been to the Museum before.
I especially wanted him to check out the Malay Film Gallery celebrating the Golden Age of Malay films.
Ken took some very nice shots of the Gallery. Check it out below. 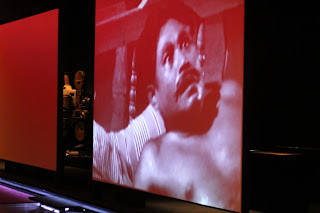 A multi-screened presentation of famous Malay films produced at Jalan Ampas
and also at Cathay Keris during the late 50s and 60s.
Amongst the films in the montage are Pontianak, Sergeant Hassan,
Raja Bersiong and Hang Tuah. 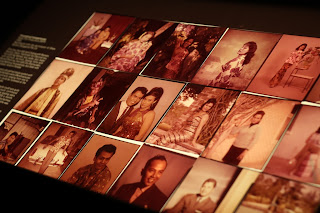 A display that had positive films of Malay film celebrities during
the Golden Age of Malay movies. 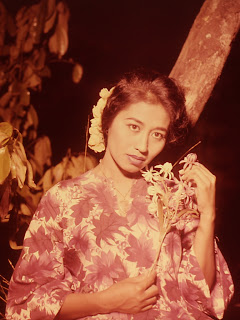 A colorised photo of my mother, Rosnani, taken for one of the more popular entertainment magazines of that time, Movie News. 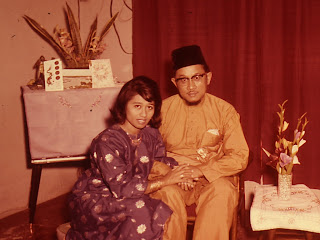 Another photo taken in my parent's home in Jalan Chengkek, if I'm not mistaken. 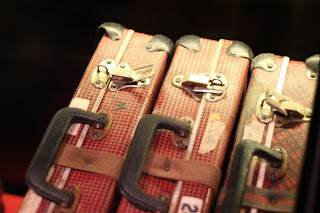 This particular bags were once used to transport film reels all over the Peninsula.
Read the caption below. 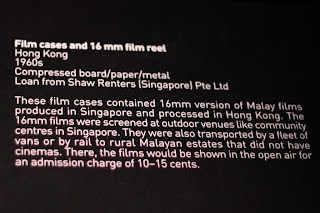 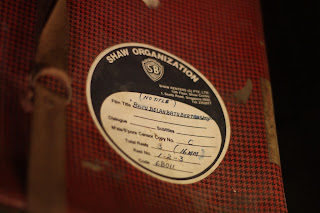 I was surprised to discover that one of the cases (bags) had this label. This case was carrying my father's "Batu Belah Batu Bertangkup" which marked his directorial debut in 1957. This case carried the 16mm reels and not the 35mm reels, which probably meant that the reels were meant for smaller towns or even for the open air screenings at villages around Singapore and Malaya at that time.
Posted by anwardi at 7:50 PM No comments:

THE WAY TO GO FOR MALAYSIAN FILMMAKERS?

Whilst local producers and directors go gaga over Red Cams and Vipers, and maybe Cinealtas, in their eagerness to go into digital filmmaking, most of them are unaware of the alternatives available to them today. Alternatives that produce excellent cinematography and economical solutions.
Last Thursday, most broadcasters and some local filmmakers, head down to Singapore for their annual Broadcast Asia Expo pilgrimage. Though the expo has lost most of its oomph in the last five or six years, curious technogeeks and technocineastes still try to find time to visit the show which is still reputed to be the biggest in Asia.
I went down with partner Ken Yap just to check out a few things that we were interested in - the DSLR digital revolution.
Why DSLR? DSLR stands for Digital Single Lens Reflex, and this is the digital version of 35mm SLR cameras me and my father used to use.
The current versions of these DSLR offers users HD quality video recording at 1080p. So what's the diff? Most consumer and prosumer camcorders are already offering full HD recording capabilities. 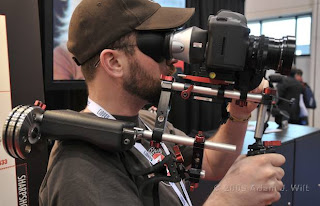 Well, most camcorders have video lenses attached to them - one's you can't change and get cinematic quality depth of field.
With DSLR cameras, one can use a plethora of film lenses to give you images true or rather near-cinematic clarity.
And while Red Cams can cost you RM150,000 and Vipers go Northward in price, DSLR solutions can begin as low as RM2500k. Even with a set of quality lenses, you may just need to burn about RM50,000.
The only concern most cinematographers have about DSLR is its bodyshape. Being a handheld camera, most users find it too light to be used for professional filmwork.
This is why, there is now a whole new industry that offers accessories turning the DSLR into mean little machines. 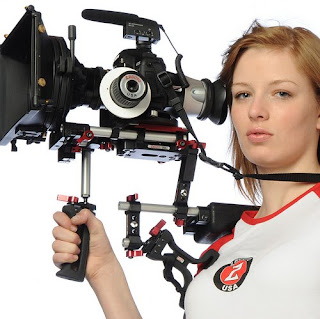 I am so impressed by these DSLRs that I am seriously considering shooting my documentaries and upcoming drama series 1870 with the Canon DSLRs.
Check out this video by renowned cinematographer and documentary filmmaker Philip Bloom. Gorgeous images from the mid range Canon 550D that retails here for about RM2500 plus.

My first memory of the World Cup was actually through a movie about the World Cup in Mexico of 1970. I was 12.
At that time, TV Malaysia was still in its infancy and my family was still settling down after coming to Petaling Jaya from Singapore a year before. I was in Secondary One in La Salle PJ.
Not yet a football fanatic, I heard about the magic of Brazilian football and when they won the World Cup in 1970, the news was something that was not electric nor mind boggling. It was just another piece of football news.
I was more interested in football comics, and at that time, I was reading Shoot, Score and Roy of the Rovers. 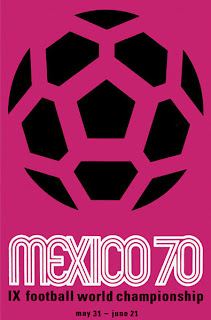 So when the movie about Mexico 1970 came to our screens (months after the tournament ended), I went more as a movie fan than a footie fan. Yes, of course I heard about Pele, but no I haven't heard about Jairzinho. It wan't really a big deal for me yet.
I did however know about the miraculous save by Gordon Banks. That I wanted to see for myself, because I was at that time toying the idea of being a goalie in school. 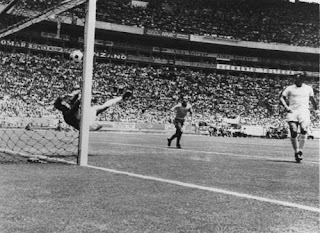 The movie was awesome. I still think that it was and still is the best movie ever made about football. Looking back, I also think that it was the best World Cup ever staged.
There was Brazil in full force.
There was the defending champions, England.
And then there was Gerd Muller of Germany, and of course the Italians.
The big match was between Brazil and England. And at last, I saw the miraculous save of Banks (pic above) from Pele. (However, since then, I think Peter Shilton and Dino Zoff had made some saves as good if not better than Banks on the world stage). Despite Banks' heroics, Bobby Charlton's men fell to a superior Brazil.
In this world cup, there were many interesting firsts - Muller scored consecutive hattricks and became the championship's top scorer. Jairzinho on the other hand became the only player ever to score in every game of the tournament.
And, of course, there was silky Pele, playing in his final World Cup. In the end, he scored four goals. Jairzinho scored seven. Muller scored ten. But it was still Pele's crowning victory.
The world cup in Mexico had one of the most memorable finals ever - Brazil vs Italy. 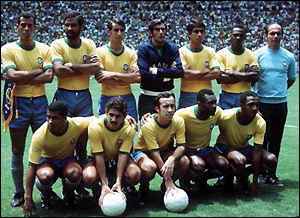 The names in both teams were legendary. Brazil fielded some of the biggest names ever to grace football - Pele, Gerson, Alberto, Rivelino, Tostao, Felix and Jairzinho (pic above). The Italians fielded Albertosi, Cera, Boninsegna and Riva.
In the end, it was a rout. Brazil 4 Italy 1.
And the Jules Rimet trophy was won for the third time by Brazil. And with that they kept the trophy forever. And that was how I remembered my first Word Cup experience. In the cinema.
Later, with the advance of TV, through magazines and through the English league, football and the world cup became somewhat of an obsession for me and my friends. Whilst I became a bonafide Liverpool FC fan since mid 70s, I never had a World Cup team that I supported blindly.
Surprisingly, I never supported the big names like Brazil, England or Germany. I did support Italy for awhile because they had Dino Zoff. I supported France for awhile because they had Platini. I supported Argentina because they had Maradona. It depends on many factors.
This year, I am an Oranjie supporter. I feel that it is time the Dutch to shine. They were unbeatable in the run up, and I hope they remain unbeatable throughout the whole tournament. Failing that, I have to go for Spain. I have to support Holland anyway because my son bought me an early Father's Day gift - an original Holland team jersey. He wears Brazilian colors and my daughter wears Torres' colors. Soon we will see whose colors triumph.
But hey, wouldn't it be really nice to see South Korea going all the way too?
Posted by anwardi at 10:40 AM 1 comment: