Being on facebook keeps on surprising me. In the past, old schoolmates and college mates, have found me (and vice versa) through this popular website. Imagine being connected by someone whom you have not met for the past thirty years suddenly communicating with you as if those years past never happened. It's amazing.
A few days ago, a young girl by the name of Nurjannah Ali, requested to be added as a friend. I thought she's another friend of mine from school days - exactly the same name.
By lo, she said she was the daughter of a famous actor from the P. Ramlee era, and not my old school friend. So, I asked who this actor was because the only actor I can remember whose name was Ali was my dad's friend and also P. Ramlee's friend by the name of Ali Fiji. And surprise surprise, Nurjannah said her father was Ali Fiji. Nurjannah, 21, is a student in UITM Melaka studying media and communication.
Her father Ali Fiji was one of the most popular actors of that era, playing all sorts of roles, from baddies to good guys including one of his most beloved roles as one of the forty thieves in Ali Baba Bujang Lapok.
Ali passed away 13 years ago at the age of 63. 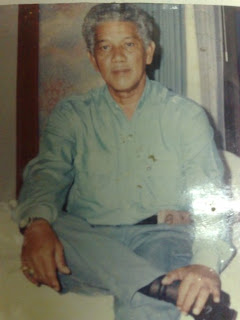 According to Nurjannah, his screen name was given to him by P. Ramlee who said that his looks (curly haired and slightly dark) reminded him of the peoples of the Fiji Islands, and so dubbed him Ali Fiji. The name stuck and til today Ali is known by many as Ali Fiji and not by his real name Ali Syed Mohammad. 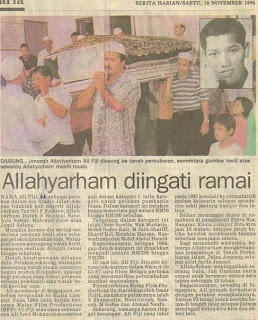 To Nurjannah, I wish her my best in her career and in hope that more children of the artistes and staff of the Malay Film Productions and Cathay Keris to come forward and contribute to information and reminisces of the Golden Age of Malay cinema. (Pictures above were given to me by Nurjannah)
Posted by anwardi at 10:04 AM